Orphan Barrel’s Entrapment is a 25-year-old Canadian whisky that was distilled by Crown Royal in 1992 and matured in Gimli. The whisky was produced from a mash bill consisting of 97% corn and 3% malted barley.

Orphan Barrel Entrapment 25 year old Canadian Whisky, Distilled in 1992, Entrapment was originally due to be included in a batch of Crown Royal Deluxe, however the spirit never made it into the blend and has instead spent the last 25 years maturing at the the distillery in Gimli, Manitoba.

Orphan Barrel is a Diageo-owned label that releases bottlings of “forgotten” whiskeys. Entrapment, a Canadian whisky, is the first non-American release from this brand. This whisky was originally destined to become Crown Royal, but somehow didn’t end up in the blend, and instead sat in the barrel for a full 25 years before being hauled down to Tullahoma, Tennessee for bottling.

The whiskey is described as “97% corn and 3% [malt]” and is the eleventh release in this particular Diageo line up. My sample came in a cute wooden book safe, complete with what seems to be a working compass. 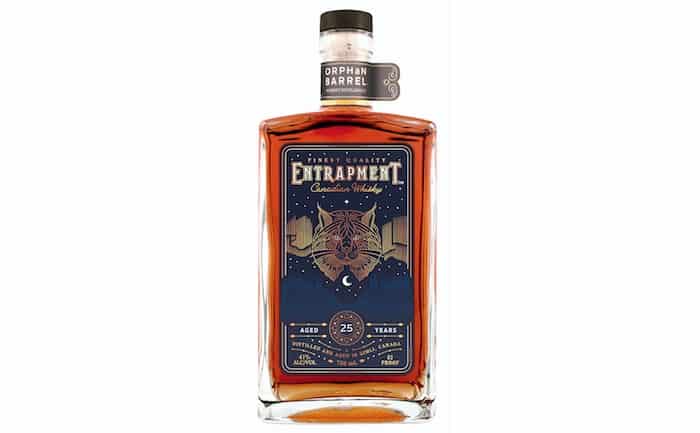 Nose: Butterscotch, faint spice, maple donut, confectioner’s sugar. Like other Canadian whiskies, this one mostly smells overwhelmingly sweet to me.

Palate: More butterscotch, syrup, and brown sugar, with a heavy dose of oak. There’s a flash of cherry cough syrup on the back of the palate, and the finish sits somewhere between bitter and medicinal. Texturally, it’s both light and faintly drying.

Nestled on the edge of Lake Winnipeg, Crown Royal’s distillery in Gimli, Manitoba, is home to 1.5 million barrels of delicious whisky that sit patiently waiting to be shared with the world. One of Manitoba’s natural beauties, the town of Gimli hugs the western shoreline of one of the world’s largest freshwater lakes, with sandy beaches, an active harbor and the largest Icelandic population outside of Iceland.

Local retailer states either in stock or in route to location. Usually ships within 1-4 days. (Mon-Fri) Longer than usual processing times may occur during the Holiday Season. The entire network of licensed retailers continue to work effortlessly fulfilling orders as they are placed however due to COVID-19 regulations some delays may occur. Select items may become backordered due to current high demand and will ship out upon arrival. Please refer to our terms of service and cancellations & returns policy.