game of thrones scotch, Winter is coming once again and this time it’s the final countdown to the war between Westeros and those pesky ice-zombies. To alleviate the period of waiting, HBO teamed up with DIAGEO, forged eight rare Scotches and paired them with the royal Houses of Westeros. Each bottle tells a wonderful story about one of the Seven Kingdoms and each has a character so unique, we’re afraid the Writer might kill it off. It’s time to bring some medieval intrigue to your home bar and hum the intro theme.

In a dark and opaque bottle comes a potion from the bleak border, distilled in the Oban Distillery which sits in the shadow of a steep cliff on the frontier between the west Highlands and the Islands of Scotland. The Night’s Watch Oban Bay Reserve is rich and wintery with a balanced spicy and woody dryness perfect for those vigils in Castle Black. The ancient rule commands you to read the vow of the Night’s Watch, written on the back of the bottle. Be the sword in the darkness and may this Single Malt Scotch Whisky be at your side.

The Oban distillery sits beneath the steep cliff that overlooks the bay in the frontier between the west Highlands and the Islands of Scotland, separating land and sea, just as Castle Black, home of The Night’s Watch, sits between Westeros and the lands beyond The Wall. The liquid’s richness is balanced with a woody, spicy dryness that The Night’s Watch could enjoy even on the coldest of nights. 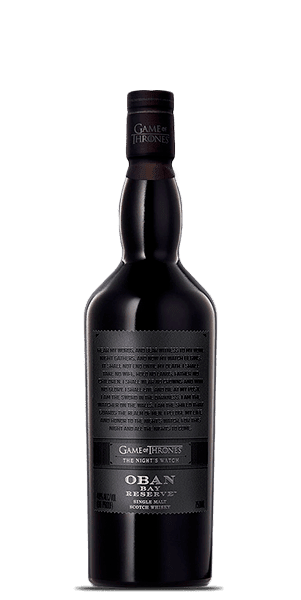 The Macallan Anecdotes of Ages

The Macallan Edition No. 6 Scotch Whisky