Eagle Rare 2018 was bottled from 45 barrels that saw a massive 89.5% loss to evaporation, it is estimated there were only 1627 bottles produced.

Eagle Rare 17 years 2018, entered the barrel in spring of 2000 and was matured in Wearhouses C. Although the label states 17 years, 2018 is actually an 18 year and 4 month old whiskey. This years release Eagle Rare 17 years of was released at 101 proof in homage to the brand’s history, it was originally introduced to the market by Seagram in 1975, and bottled at 101 proof.

All the way from the legendary Buffalo Trace Distillery in Frankfort, Kentucky, comes Eagle Rare. A spectacular Kentucky straight Bourbon whiskey, matured for at least a decade before making its way into its distinctive bottles at 45% ABV. What’s so distinctive about the bottles, you ask? Well, we’re going to say it’s the massive bald eagle, wings outstretched, looking like it’s about to snatch up some dinner. Distinctive, yes? The whiskey is also pretty distinctive too, boasting full-bodied notes of cinder toffee, orange peel and buttery corn. 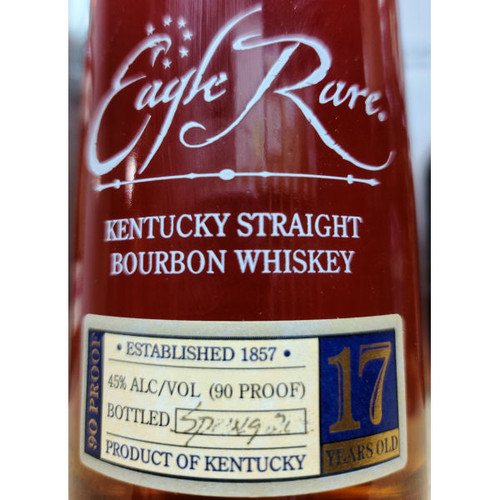 Nose: The aroma is quite intense with brown butter caramels and baking spices. Char smoke is mild.

Palate: The bourbon is somewhat chewy and tannic at the finish but shows complexity throughout.

Finish: The finish has a nice bite from the increased proof and presents some dried herbs and roasted corn.

Buffalo Trace Distillery is a distillery in Frankfort, Kentucky, that is owned by the Sazerac Company. Eagle Rare 17 years has historically been known by several names, including the George T. Stagg Distillery and the Old Fire Copper Distillery.

**Local retailer states either in stock or in route to location. Usually ships within 1-4 days. (Mon-Fri) Longer than usual processing times may occur during the Holiday Season. The entire network of licensed retailers continue to work effortlessly fulfilling orders as they are placed however due to COVID-19 regulations some delays may occur. Select items may become backordered due to current high demand and will ship out upon arrival. Please refer to our terms of service and cancellations & returns policy.